skip to main | skip to sidebar

Shower The People You Love With Love

On March 8, 2021, The Washington Post declared a decisive victory in an important battle in The War on Poverty. 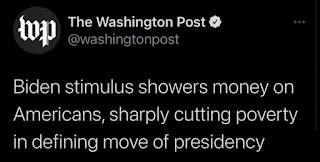 This took place on Twitter, and was obviously tweeted by a very important tweeter, because only an important tweeter would tweet officially for the Post. In case you can't see it for some reason, it reads, "Biden stimulus showers money on Americans, sharply cutting poverty in defining move of presidency[.]" Wow. Sounds amazing. Great tweet, WaPo tweeter. Jeff Bezos will be proud of you and maybe give you a raise. I could talk about how stupid this is, and how it's a complete lie, how these federal [sic] stimulus checks are economically retarded, how Modern Monetary Theory is just repackaged garbage, etc. But there's something else notable about this statement. This WaPo employee (and obviously amateur propagandist) took an egregious economic catastrophe and poured a mountain of sugar encrusted halos on it. The "Biden stimulus" is showering money on Americans? It's $1400, to round out the measly $600 we got from Trump a few months ago. If this is a shower then we all still have stinky armpits. Still, this generous shower granted by His Holiness Joe Biden is sharply cutting poverty. Such a cut. Poverty will surely die from this wound any day now. But I'm getting sidetracked. My point is not to make fun of the noodlearmed commie who tweeted the tweet, my point it this: A major news outlet (I'm supposing. I don't really know how major the Post is) owned by the Current Richest Man In The World Jeff Bezos, is showering honor and glory on a massively destructive bill passed by congress and signed by a senile imbecile of a president. This is everything that's wrong wrapped up in one brief, ridiculous statement. There is no functioning news media in the United States, there is only this—the poorly concealed, manipulative propaganda of a kept press being used as a blindfold over the eyes of a completely ignorant public. [Imagine a line of blindfolded prisoners being lined up against a wall, ready for execution, and they start celebrating because they got cigarettes. That's you and your stimmy.] Demented politicians, oligarchs, and the lackey media are holding hands, which leaves the rest of us as victims of their shared purpose, which is an another discussion altogether, but trust me, the end of that shared purpose looks something like a North Korean work camp, or maybe it looks more like Planet of the Apes without the apes. That regular people have lost control over the political process and aren't allowed to know the truth about what's going on is a serious problem, the kind you can't vote your way out of.

Read This If You Can Handle It

A Selection of Genius Types